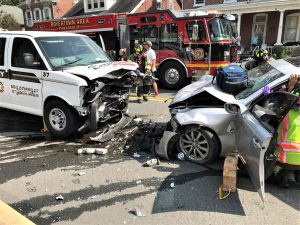 Company 95 was dispatched to the area of 215 West Philadelphia Avenue for a two vehicle head on crash reported with entrapment and unconscious occupants. On arrival crews found that an occupant in the one vehicle was trapped in the vehicle and doors and the center post on the right side of the vehicle needed to be removed to extricate the female occupant. All occupants were conscious when Crews arrived. Ambulances from Bally and Goodwill Pottstown were on scene for three patients. Crews stabilized the vehicles and tended to the injured occupants until they were extricated and turned over to EMS. Crews powered down the vehicles and assisted Faust Towing with removing both vehicles.

Crews were assisted by Gilbertsville Fire & Rescue at the scene.